A post on PANN discusses how powerful EXO is as a CF model compared to other celebrities.

When other celebrities model products:

However, when a company is lucky enough to land EXO as models for their products, a widespread over-the-top advertising campaign is launched.

Have you seen the prices of EXO’s Nature Republic lip balms? It’s like $10 more than a regular lip balm. AND! Nature Republic tries to get fans to buy the lip balm over and over in hopes of collecting all 12 EXO pictures for their collection from Nature Republic’s randomized selection.

The post continues to say that companies remodel their entire stores with pictures of EXO in order to draw fans in. And it totally works.

Check out netizen/EXO-L’s comments about this post below, translated by KpopKfans: 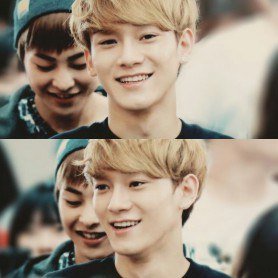 3. [+148, -3] Fucking Nature, fuck fuck fuck. It’s like buying the photo card and getting hand cream and lip balm as extra

4. [+67, -1] I’m non-fan but I agree ㅋㅋ Whenever I pass by Baskin Robbins, the shop is spammed with EXO posters ㅋㅋ I thought the fans would get a heart attack by that

5. [+62, -2] Honestly, when they use a lip balm at an airport, the lip balm company’s profits increase crazily, even if they’re not the model or anything ㅋㅋㅋ

8. [+50, -0] Yixing brought a sheep doll to an airport and it was sold out right away ㅋㅋ And the doll company even mentioned Lay ㅋㅋ

Baekhyun showing fans how much he loves them

Xiumin ranks as #1 star people want to give chocolates to