Fan club quarrels are so silly, I just can’t even sometimes.

So Inspirits were tweeting criticism about how EXO Xiumin’s bus ads for his birthday looks exactly like INFINITE Woohyun’s bus ads that Inspirits purchased.

However, EXO-L’s quickly brought up the ads that they bought for Baekhyun last year, which shows that Woohyun’s bus is an identical copy of that design.

After all of the evidence was revealed, both Inspirits and EXO-L quiet their tweets downed. However, EXO-L posted the issue on PANN to clarify the entire issue.

Check out netizen/EXO-L’s comments below of the PANN below:

Baekhyun’s bus a year ago

1. [+247, -16] So basically, Woohyun fans claimed that Xiumin bus was similar to Woohyun bus. But Woohyun bus turned out to be more similar to Baekhyun bus which came out a year ago. So Woohyun fans are shutting up now
2. [+204, -15] Some people can’t read. Firstly, Woohyun fans complained that Xiumin bus was copied from Woohyun bus design. Now who’s the one that bullshitted about copying? Is it their first time of running a bus ad or what? Tsk tsk
3. [+175, -30] Why do I find it so funny that Inspirits are going insane? ㅋㅋ They’re the ones that started it, I’m so dumbfounded ㅋㅋ
4. [+73, -1] Look what they said ㅋㅋㅋㅋ How hurtful 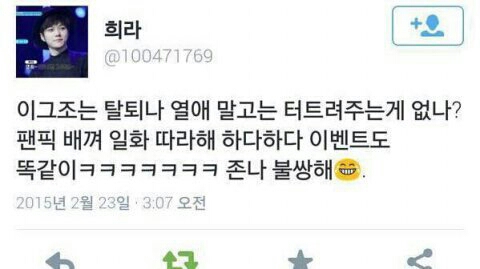 Inspirit: “Doesn’t this group have anything else to report besides withdrawals and dating rumors? Copying fanfics, copying anecdotes, and even copying events ㅋㅋㅋ How pitiful”
5. [+71, -6] Inspirits are giving me goosebumps. If EXO fans did this, they would be like, “look at the class of EXO-roaches, tsk tsk.” EXO gets hate for every little detail and think of how you guys generalized EXO fans. Double standards much?
6. [+67, -6] They even targeted Baekhyun union ㅋㅋ Go and read the clarifications from Baekhyun union. I felt so fresh after reading it. If you nitpick everything like this, then there can be no more birthday ads. Why would we copy your stuff anyways? And stop saying EXO-roaches, this is Inspirits’ fault. We’re the victims, why are you bashing us when they’re at fault?
7. [+65, -10] Look at those rude Inspirit-roaches. They’re so pathetic, all they can do is to downvote the comments here
8. [+40, -3] If EXO-L did this, people would say, “look at the class of EXO-roaches”

GQ Magazines chooses Kyungsoo as one of “50 New Gentleman”