Sehun being taken advantage of by his “best friend”

His name is Hyunbin and instead of treating Sehun like his BFF, he’s been taken advantage of Sehun’s fame and using it for his own personal gain.

He goes around telling anyone and everyone that he’s best friends with “Sehun from the popular group EXO”, and he uses his affiliation with Sehun to hang out with EXO’s sasaeng fans.

There are pictures floating around of him going out to drink with these sasaeng fans, some of whom are underage.

He posts up private SNS messages with Sehun on Instagram and he even posts locations of where he and Sehun hang out, just to get on the good side of EXO’s sasaeng fans.

Sehun even commented on one of Hyunbin’s posts saying that he shouldn’t upload these pics on SNS.

Somestimes (or most of the time), he even brings sasaeng fans to hang out with Sehun.

And you can imagine that that pisses our maknae off very much.

Hyunbin has been giving out unseen pictures of Sehun to the sasaeng fans, and people have even overheard him talking about Sehun’s personal life for nearly two hours straight at a time.

Call me crazy, but I don’t think you can call yourself someone’s best friend if you’re constantly throwing them under the bus just to boost your own ego.

EXO fans are getting really pissed off at Hyunbin.

They leave comments on his Instagram asking him why he’s behaving like a celebrity when he’s just piggybacking off Sehun’s fame.

Fans also find it weird how he’s signing autographs and receiving gifts from doing nothing but backstabbing Sehun.

One of Sehun/Hyunbin’s friends left a comment saying that he’d known Hyunbin since high school and has always disliked him. When Sehun just debuted, Hyunbin would constantly ask for Sehun’s autograph and would request selfies with him. It got annoying to the point where Sehun asked if  Hyunbin came to hang out with him or to just ask for his signature.

Oh, to put the cherry on top of Hyunbin’s asshole-ness, he left a comment on Instagram calling EXO fans (the ones he takes advantage of and craves attention from) “pathetic kids”.

I hope Sehun questions his relationship with Hyunbin at some point.

You can check out the entire compilation of Naver/Pann/Instiz posts on Ayoshiari’s Tumblr. Also read her translation of fans’/netizens’ comments about Hyunbin below!

[+249 -3] Oh Sehun is soft-hearted. He should manage his relationship with people. Ah so because of this thats why celebs clean up their human relations when they debuted

[+220 -3] Who is he? Calling himself friend but only to make Sehun pathetic. Sehun just wants to rest and play with close friends but he posted those pics and obviously using Sehun. Looking at how he called Sehun’s fans as pathetic kids makes me pissed off. Who are you to insult fans kkkkk ㅋㅋㅋㅋㅋ Sehun-ah, live well while meet good people. You dont need that trash in your life.

[+204 -6] Ya… what a retard.. if he were me when I get backlash I will feel devastated and turn down the post but he called us as pathetic kids? What an attention whore.. i’m lucky that I dont do SNS so can’t give him that attention, fuck

[+97 -0] Only those?ㅋㅋㅋㅋㅋㅋ He captured his convo with Sehun on Kakao but he didnt even cut Sehun’s profpic and posted it make sasaeng compared if Sehun’s number that they have match with Kakao acc that Hyunbin’s posted. That convo contains his message to Sehun ‘You’re late from our promised time, why dont you come?’ Doesnt he creates Sehun’s image as a man who always late? Sehun is a kid who always practicing and coming to the company but Hyunbin only uploads pics of him hanging out, framing him as a kid who doesnt practice and always plays around. On Pepero day he clearly left comment ‘Oh Sehun, because you bought it you should eat it’.  (t/n-omitted: story about Hyunbin brags his relationship with Sehun and only met him for signature until Sehun’s mad during debut era) In that neighborhood he’s famous for selling Sehun’s name and gains a lot of hate too.  Dont you feel embarrassed for taking advantage of your friends at that age? I’ve also heard story behind showbiz world from my friends but I dont run around spoil it. As for Hyunbin, he told everyone about EXO private life. It’s not Sehun’s fault who can’t manage his relationship but it’s not easy to just cut off relation with people. Sehun should be more careful. Whoever see it, Hyunbin is a jerk who can’t be fixed

[+65 -0] What I dislike the most, that Japanese sasaeng is 3rd grade in Japan senior highschool but in Korea she still 2nd grade fuckㅋㅋㅋㅋㅋㅋㅋㅋis he crazy? He picked up underage to drink alcohol, right? What a son of a bitch

[+61 -0] Fucking bitch. He uses Sehun and receives attention thus caught in celebrity diseaseㅋㅋㅋㅋㅋㅋㅋOh Sehun I hope you dont play with him anymoreㅋㅋㅋㅋㅋㄱㅋㅋ

[+54 -0] Sehun is still young so he doesnt know the meaning of friend yet. It’s hard to see that attention-whore friend as friend now. I hope he meets friend who can respect and considerate about him. If he can make a group of other boygroup members who are the same age and be close they can understand each other. That attention-whore should be thrown out from Sehun’s life 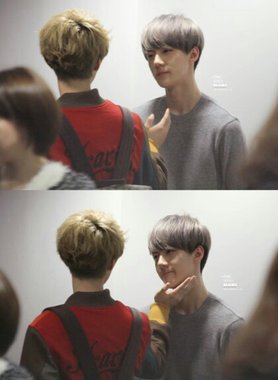 [+53 -0] What… dont insult Oh Sehun everyone… it’s crossing the line. what crime did sehun do…

[+49 -0] I’m not his fan, but i’m pissed off. As expected, when the world is bigger, the trash also getting much more and more;; by the way, does sehun not know he has a friend like that???

EXO and the 2014 SBS MTV Best of the Best Awards